We rescue and provide sanctuary to equines in need. We rehabilitate their minds, bodies and spirits. They in turn then become valuable healers to humans. 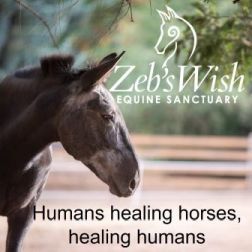 Black Velvet was a young mustang that was not very well understood by his owner. Because he would not tolerate his halter, he was tied to a horse trailer by it and left to fight it out until exhaustion; in the process, he nearly hung himself. This traumatic event resulted in a fearful horse not handleable by humans. Like many other abandoned, neglected, or traumatized Equines, he landed at Zeb’s Wish where a little kindness and understanding goes a long way. Renamed Bodhisattva, due to his quick ability to learn and teach others, Bodhi became our gentle herd leader, an absolute cupcake and a favorite of the equine assisted learning professionals and volunteers here at Zeb’s Wish. Bodhi is a perfect example of the power of listening and healing and a shining example of what we do. We rescue and rehabilitate special needs equines, conduct equine assisted learning and therapeutic activities, and heal humans and equines alike. One of the most amazing things that we often witness here is to see a broken animal come in and find its pieces to become whole again. To really be seen and to really be heard. I can say the same thing for the people who come here. They may come with the idea that they are going to serve these poor animals. And they do this well, but what is equally inspirational is the amount of healing that happens with the volunteers and participants. Its such an amazing reciprocity. It isn’t just people healing horses, it is truly a circle of humans healing horses, healing humans. To hear the whole story of Zeb's Wish.  View our video or go to www.zebswish.org